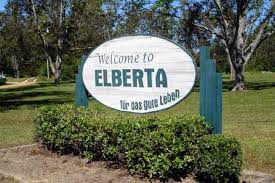 Elberta, Alabama is a town in Baldwin County located near the beach and bay. The population of this town is roughly 1,800 and is continuing to grow. The number of residents in the area are slowly rising due to the growth in surrounding communities Having the beach, bay, and country life is all possible in this area and there is plenty of room for growth!

The downtown area of Elberta has some small shops and grocery stores for locals!

There are several places to eat in Elberta for any time of the day! Try local food and home-style cooking!

Elberta is a very family-friendly area and currently does not have hotels. Try booking online in Foley or on our beaches!

If you find yourself wanting to plan a trip to this area, try to plan around an event! Activities are constantly being held year-round in this area and everyone from the area comes out to support local businesses and holidays. New Year’s, Mardi Gras, festivals and more are just some of the events that locals look forward to every year!

Elberta is very close to Foley where there are plenty of care options! Make sure you know where the nearest hospital and urgent cares are prior to visiting so you can make the best plan for your family and yourself!

Elberta has plenty of places to walk and play outdoors! Go visit Barber’s Marina to find dinosaurs, Stonehenge, and statue scattered throughout the property!

Sign Up
Already a User? Sign In
You have been successfully registered
Please check your email.
Go to the homepage
Sorry something went wrong
Please try again.
Try again

Want to know the value of your home?